Asbestos in Cement Pipes and Other Building Materials

Cement pipe containing asbestos was first used in the United States and Canada in 1931, primarily in western states. This kind of concrete pipe was made from a mixture of Portland cement and asbestos fiber; the addition of asbestos made the pipes very durable and resistant to corrosion (cement that contains asbestos fiber is also known as transite). By 1953, the American Water Works Association had put standards into place governing the use of asbestos cement pipe in municipal water systems throughout the country.

The expected service life of these asbestos cement pipes was originally expected to be approximately seventy years. Even today, asbestos cement pipe remains part of a number of city water delivery systems, and these pipes are now starting to reach the end of their useful lifespan. Most municipalities have been working on removing and replacing these pipes over the past thirty years.

While the asbestos contained in these water pipes is not likely to become airborne and cause respiratory disease, there have been serious health consequences for those in communities where public water supplies still travel through asbestos cement pipes. Local environmental issues could cause this type of pipe to deteriorate, leaching asbestos fibers into the water. According to Canadian author Barbara Robson, the problem in Woodstock, New York became so bad in 1985 that residential pipes were clogged with asbestos fibers. Her figures suggest that at one point, there may have been as much as 400,000 miles of asbestos cement pipe in North America. 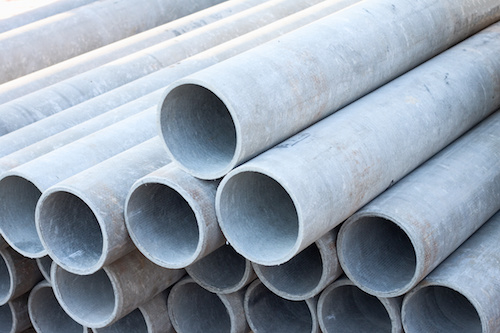